By Independent.ie
Thursday, 31st May 2018
Filed under: legalaid, bail, conviction

A PSYCHIC turned financier charged with fraud and money-laundering offences has been further remanded in custody pending the preparation of a book of evidence.

Astrologer and tarot reader, Simon Gold, 53, with an address at Cartontroy, Athlone, Co. Westmeath faced his second hearing when he appeared at Cloverhill District Court on Thursday, having been refused bail earlier.

Mr Gold is best known for his firm Astrology Ireland and has billed himself as “Ireland’s Leading 7th Generation Psychic Astrologer & Tarot Master”.

He was charged with money laundering by allegedly possessing €800,000 in proceeds of criminal conduct at a bank in Dublin on Oct. 19, 2012.

Defence barrister Niall Storan (instructed by solicitor Brian Keenan) told Judge Victor Blake his client consented to being further remanded in custody to appear again on June 28 next for a book of evidence to be prepared.

Counsel said his client also agreed to appearing via video-link at the next hearing.

The defence asked the judge to direct medical attention for Mr Gold because he had “breathing problems and finds it difficult to walk”. He is being held on the second floor of the prison, in a cell with others, counsel told the judge.

In reply, Judge Blake remarked, “I cannot give room numbers” but he added that he was noting Mr Gold had breathing problems and he directed medical attention for him.

Det Tom Victory of the Garda National Economic Crime Bureau was furnished with a statement of Mr Gold's means.

State solicitor Michelle Sheeran told Judge Blake that funds in the accused’s bank account have been frozen and she accepted he did not have the means to pay for his defence.

Noting there was no objection, Judge Blake granted legal aid to Mr Gold who spoke only to his barrister during the hearing.

In addition to the money laundering charge he was also charged with deception, that between Feb. 18 and March 9, 2011, he induced a named man to transfer €28,000 to an account of a named financial consultancy firm.

He has three other counts of deception with charges that on other dates in 2011 he induced three other people to transfer stg£30,000, stg£10,000 and another sum of stg£10,000 to the account of the same financial consultancy firm.

The businessman was also charged with having false instruments: one blank bank draft and six other bank drafts with various sums, totalling €55m, payable to three individuals and a named financial advice business. He is charged that he had these drafts in his custody in Delvin, Co. Westmeath on Oct. 22, 2012.

He also had another charge of having another false instrument on a date in 2014 at a location in Co. Leitrim: four sheets allegedly containing 360 removable holograms purporting to be AIB holograms.

The 53-year-old has not yet entered a plea to the charges and the Director of Public Prosecutions has directed that he is to face trial on indictment. This means his case will be sent forward to the Circuit Court, which has tougher sentencing powers, once the prosecution has completed preparing a book of evidence. 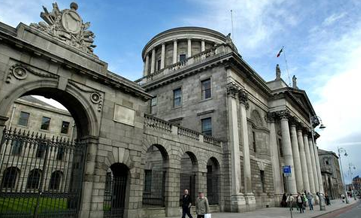